Infertility: Everything You Need to Know 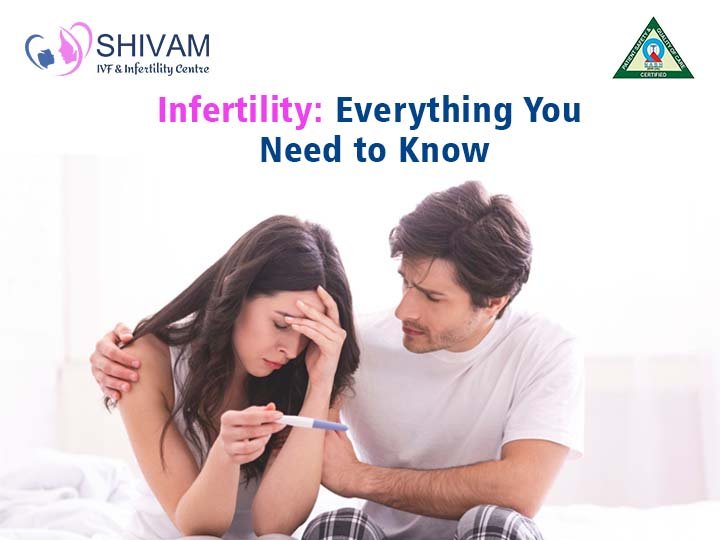 Infertility: Everything You Need to Know

Generally, infertility is defined as a woman is now being able to get pregnant and conceive a baby even after trying their best for almost a year. As it is obvious fertility in women steadily declines with increasing age. Women who are able to conceive but do not carry a pregnancy to term may also be diagnosed with infertility.

Not only women but men face infertility issues with the same ratio all over the World.  The remaining cases must be caused by the combination of male and female infertility, or they may have an unknown cause. Shivam IVF Centre well known as the best IVF centre in Delhi comes out as the most trusted solution which comes across unknown causes of infertility and also treats it with proper guidance, progressive and modern techniques.

Generally speaking, infertility in men is related to issues with the following:
• Effective production of sperm
• Sperm count, or the number of sperm
• Shape of the sperm
• Movement of the sperm, which includes both the wiggling motion of the sperm themselves and the transport of the sperm through the tubes of the male reproductive system
There are a variety of risk factors, medical conditions, and medications that can also affect fertility.

Risk factors
Risk factors associated with infertility in men include, but aren’t limited to:
• Older age
• Smoking cigarettes
• Heavy use of alcohol
• Being overweight or obese
• Exposure to toxins, such as pesticides, herbicides, and heavy metals.

Medications and drugs
Various medications and drugs can also affect male fertility, such as:
• Chemotherapy or radiation therapy, which is used for cancer.
• Sulfasalazine (Azulfidine, Azulfidine EN-Tabs), which is used for rheumatoid arthritis (RA) or ulcerative colitis (UC).
• Calcium channel blockers, which are used for high blood pressure.
• Tricyclic antidepressants.
• Anabolic steroids, which are used for improved athletic performance or hormonal issues such as delayed puberty.
• Recreational drugs such as marijuana and cocaine.

Causes of female infertility
Several causes which may affect female infertility during the biological process are as follows:-
• Ovulation, when the mature egg is released from the ovary
• Fertilization, which occurs when sperm meets the egg in the fallopian tube after travelling through the cervix and uterus
• Implantation, which occurs when a fertilized egg attaches to the lining of the uterus where it can then grow and develop into a baby

Medical conditions
A bunch of various medical conditions can affect the female reproductive system and cause infertility in women.
Examples include:
• Ovulation disorders, which can be caused by polycystic ovary syndrome (PCOS) or hormonal imbalances
• Pelvic inflammatory disease (PID)
• Endometriosis
• Uterine fibroids
• Premature ovarian failure
• Scarring from a previous surgery

Certain medications and drugs that can affect female infertility include:
• Chemotherapy or radiation therapy
• Long-term use of high-dosage of non-steroidal anti-inflammatory drugs (NSAIDs) such as aspirin (Bayer) and ibuprofen (Advil, Motrin).
• Antipsychotic medications
• Recreational drugs such as marijuana and cocaine

Infertility testing
If you are unable to conceive even after trying for a year and you’re likely to consult a doctor regarding the same.
So, read this blog to acknowledge yourself about the various tests doctors will perform to assess the fertility of you and your partner.

Men
Men should plan to see a doctor after one year of trying to conceive or if any of the following apply:
• Erectile dysfunction (ED)
• Problems with ejaculation, such as delayed ejaculation or retrograde ejaculation
• Low sex drive
• Pain or swelling in the genital area
• Having undergone a previous surgery in the genital area.

A semen analysis will likely then should be performed. Your doctor will ask you to provide a sample of semen. This sample will then be checked in a laboratory to see how many sperm are present and whether the sperm are shaped normally and moving properly.

These tests may include:
• Hormone testing
• Genital ultrasound
• Genetic testing

Women
Then they’ll perform an examination of your pelvic area to check for abnormalities such as fibroids or conditions such as endometriosis or PID.
Your doctor will want to see if you’re ovulating every month. This can be determined with an at-home ovulation testing kit or through blood testing at the doctor’s office.

An ultrasound may also be used to examine the ovaries and uterus.
Other common tests for women include:
• Hysterosalpingography, which is a type of X-ray used to evaluate the fallopian tubes and uterus
• Laparoscopy, which uses a camera to examine the internal organs
• Ovarian reserve testing, which uses a combination of hormone tests to determine a woman’s potential for conceiving — relevant tests include the follicle-stimulating hormone.

Women
Medicines Can Be Used To Restore Fertility-
• Clomiphene citrate. Taken by mouth, this drug stimulates ovulation by causing the pituitary gland to release more FSH and LH, which stimulate the growth of an ovarian follicle containing an egg.
• Gonadotropins.
• Metformin.
• Letrozole.
• Bromocriptine.

Natural treatments are based on different factors and guidelines such as yoga, diet, acupuncture and much more.

This information is not enough for you if you and your partner facing infertility problems so consult the experienced and best IVF doctor in Delhi, Dr Bhavna Mittal,  at Shivam IVF Centre for better guidance and infertility treatments. We as a team of the best Fertility Centre in Delhi commits to providing you with the top quality health facilities with an emotion of care towards patients with the best and safest treatment.
We love to be the helping hand for you to give birth to a new soul in your life.


Get An Appointment Now !